Services have been held at Royal Star & Garter to mark Remembrance Day on 11 November.

They included the playing of The Last Post, a two-minute silence and the laying of poppy wreaths, marking the culmination of a fortnight of events and activities at the charity’s three Homes. Royal Star & Garter provides loving and compassionate care to veterans and their partners living with disability or dementia.

Veterans from the Surbiton and High Wycombe Homes also attended the National Service of Remembrance on Remembrance Sunday at the Cenotaph in Whitehall, London. In Solihull, residents, staff and volunteers laid a wreath at the local Remembrance Sunday Service and Parade at St Alphege’s Parish Church.

The Solihull residents made poppies from the bottoms of plastic bottles in the run-up to Remembrance Day (Monday, 11 November), which were used to decorate the Home. The service was conducted by Chaplain Speaker Stephen Linstead and also featured a standard bearer and bugler. Later that day, residents went on an outing to nearby Feckenham, a village which holds special events to commemorate its men who fought in the First World War each Remembrance.

At Surbiton, residents made paper poppies and wreaths with children from nearby St Matthew’s Primary School. There were also daily readings of First World War poems in the week leading up to Remembrance, each followed by a minute’s silence. On Remembrance Sunday, five residents attended the local service at Surbiton War Memorial. The service on Remembrance Day was led by Reverend Helen Hancock and supported by a standard bearer and bugler. Also on Remembrance Day, residents from the Home attended the annual Western Front Association Service of Remembrance at the Cenotaph.

In High Wycombe, residents made felt, tissue and knitted poppies, while others created the flower using their thumb prints. The Remembrance Day service was led by Padre Flight Lieutenant Chrissie Lacey.

Royal Star & Garter Chairman, Major General Tim Tyler, said: “Our residents have served, and many have loved ones and friends who served or are serving in Her Majesty’s Armed Forces. So Remembrance has special significance for them and they take pride and comfort in participating in the National Service of Remembrance at the Cenotaph, local parades and the services in our three Homes. We all have a duty never to forget the sacrifices made by servicemen and women and their families who have served this country.”

Staff at the charity’s admin office in Hampton also marked Remembrance Day by observing the two minute’s silence and raising the Union Flag.

For more information about life with Royal Star & Garter, go to: https://starandgarter.org/our-homes-and-care/life-in-our-homes

To for details of Royal Star & Garter’s 2019 Remembrance Appeal, go to: https://starandgarter.org/remembrance/ 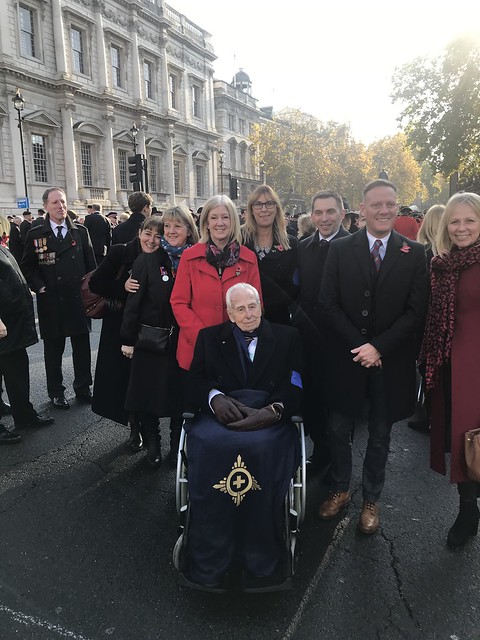 A retired Major General is on the final push of a gruelling 12-month challenge to raise money for veterans’ charity Royal Star & Garter.…